We know the first time competing at Interschools can be a little daunting and there is so much to know. For those that have been before there are always still common questions. We are more than happy to answer any question for you but also thought it would be helpful if we listed some of them here, along with some additional helpful information. 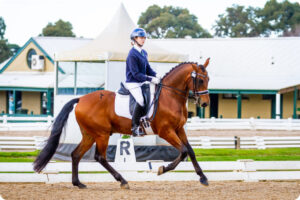 Equestrian Victoria runs the Interschool State Championships each year, over 5 days in the April school holidays, at Werribee Park (WPNEC) with over 400 young riders. At this event riders may qualify to compete at the Australian Interschool Championships. The schedule for the event is published at the commencement of each year.

Who can ride at the State Championships?

Any student for Prep-Year 12, who is current enrolled in a school or is home schooled through Distance Education may compete. Families should inform their school that they may be riding under their school name and check if there are any requirements in regard to behaviour, dress or safety.

Do I have to qualify to enter the EV State Championships?

The combination of the horse and rider must compete at a “participation event” on the interschool calendar between April of the previous year and the end of February in the year of entry. This excludes the Australian Championships. Riders do not technically need to “qualify” in a certain discipline.

Does the competitor have to be a member of Equestrian Australia/Victoria to compete at the State Championships?

How do we enter the State Championships if we are not a member when entries close?

Those riders who are not EV members at time of entry will need to take out membership for the year. At time of putting in your online entries on Nominate, enter the membership number as 99999 and contact the EV Office to process a membership renewal or process a new membership online via http://www.vic.equestrian.org.au. Memberships will be checked. Pro rata membership is offered to those joining for the first time between January and June 30th.

Do I need a school team?
Riders may enter the Championships as individuals with placings and prizes awarded. They may require an agreement from their school. The individual’s best four scores are used for deciding the Champion Secondary and Primary rider. The team component uses the best 4 scores of the best four riders from each school to award the Champion School Team. Some schools may have multiple campuses for team scoring purposes. These campuses must come under the same Governance/Board and same Principal (Head of School). For example a school may have a Senior Campus Year 7-12 and Primary Campuses Prep-Year 6.  There are no composite teams.

I have never competed in Interschool events before and I am unsure of the level I should be riding at?

Interschool events are in set year levels groups and have classes within this levels. Primary Prep-Year 6 and  Secondary Year 7-12 with Dressage divisions- Senior Year 10, 11, 12 and Intermediate Year 7, 8, 9.

In most competitions the rider selects a level that is suitable for their horse and themselves. This may be based on prior experience, a coach’s advice, a school coordinator’s assistance. It is best to commence at a safe and sometimes lower level than practised at home.  If the horse carries a performance card, has points or has competed at high levels this may set rules for entry. Equestrian Victoria would have further information available through the horse’s registration details.

Do horses have to be registered to compete in Interschool events?

What do I wear to compete in?

Interschool competitors need to wear light coloured jodhpurs and school equestrian uniform. This may be a sports shirt, windcheater or shirt tie and jumper. No riding jackets are allowed unless you are selected for the Victorian Interschool Team. Gloves are compulsory for Dressage, preferably light coloured.

How can I represent Victoria at the Australia Interschool Championships? Please refer to the ISV website for further information https://www.equestrianinterschoolvictoria.com.au/

There are currently 3 pathways to qualify for the Victorian team:

Protective headgear must conform to one of the current approved safety standards:

Combined Training classes require all helmets to be inspected and tagged from January 2020.

Riding boots smooth‐soled, low‐heeled boots (short or long, except for Show Horse). Gaiters and long boots may be worn in all disciplines except Show Horse, where top boots and gaiters can only be worn by competitors 18 years and over.

EA rules for each discipline may have specific requirements in regard to dress and approved horse gear.

What classes are eligible for selection to the Victorian Team?

Elementary, Medium and Advanced Freestyle and Pas de deux are offered at EV State Championships but any placings awarded do not accrue points for individual or team prizes.

The first four placegetters in Combined Training at the EV State Championships in the National qualifying events are selected to represent Victoria at the Australian Championships.

The Equestrian Victoria State Championships classes offer a pathway to the Australian Interschool competition and are run in a standard format with all riders having three phases, with workouts as individuals. Cumulative scores decide Championships and placings. The top four competitors in Primary and Secondary divisions of Show Horse, Show Hunter and Working Hunter classes are selected in the Victorian Team.